For an optimal site experience, we recommend using a different browser.
Using Internet Explorer may prevent you from accessing Chubb.com, and some site features may not function as expected.

X
About Us VN

At Chubb, we recognize our responsibility to provide solutions that help clients manage environmental risks, to reduce our own environmental impact, and to make meaningful contributions to environmental causes.

Chubb reports to the CDP on an annual basis by disclosing climate change risks and opportunities as well as emissions performance. In addition, a third-party certified environmental statement on the company’s GHG emissions program is included in the company’s annual report.

Environmental Solutions
Chubb has been a pioneer in developing advanced environmental insurance solutions, including coverages for premises-based exposures, contractors’ and project pollution liability, renewable energy, clean tech and environmental cleanup projects, as well as “green building” consulting services and a property policy that enables greener rebuilding after a loss.

Carbon Emissions Reductions
A primary objective of Chubb’s environmental program is to measure, record and reduce greenhouse gas (GHG) emissions in the company’s own operations. Prior to ACE Limited’s January 2016 acquisition of The Chubb Corporation, which created a global insurance leader operating under the renowned Chubb, ACE announced a companywide goal to reduce GHG emissions by 10% per employee from 2012 to 2020. Through 2015, the company has achieved a decrease in emissions of 5.3% per employee from the 2012 base year. This goal, set in September 2014, followed the successful achievement of Chubb’s first emissions reduction goal, which was 8% per employee from 2006 to 2012. Between 2006 and 2012, the company’s GHG emissions were reduced nearly 27% per employee. Legacy Chubb’s progress on carbon emissions includes reducing Scope 1 and Scope 2 emissions by 18% between 2008 and 2014 in the facilities it managed.

The new Chubb is committed to pursuing its GHG reduction target and plans to announce an updated goal, which will encompass the operations of legacy Chubb, in 2017. The combined company will continue to deploy successful approaches to reduce GHG emissions, including installing energy-efficient lighting and equipment and more efficient use of office space.

Recognition
In 2015, prior to the Chubb acquisition, ACE earned a CDP disclosure score of 99 and a performance score of B, earning a spot on the S&P 500 Carbon Disclosure Leadership Index. In 2014, the company was one of just nine insurers – out of more than 330 ranked – to be cited as a leader for its climate risk disclosures by Ceres.

The environment is a priority in Chubb’s corporate philanthropy. Chubb supports communities around the world in which our employees live and work through our established philanthropic entities and via company-sponsored volunteer initiatives. For example, grants from Chubb’s charitable foundations have helped preserve sensitive lands and habitats across the U.S. and around the world, finance “green” business entrepreneurs, and support educational programs that promote a healthy and sustainable environment. 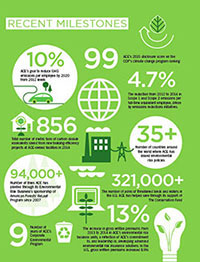